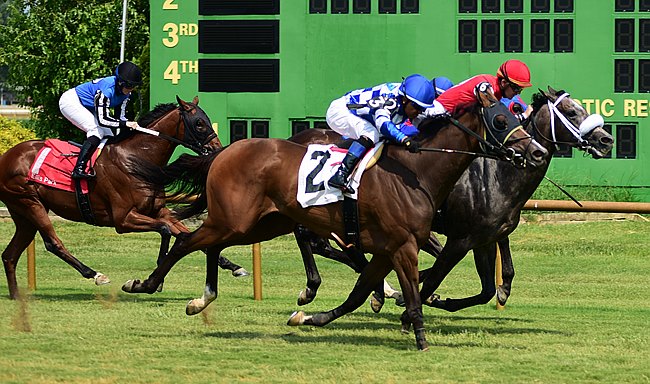 Asked about winning three races, Oliver said: “Oh, it’s unbelievable. The last time I won three in a day was at The Meadowlands a long, long time ago (2006), when they had one of those all-day turf days.”

She said winning two stakes in a day was a first.

“Never done that, so that’s exciting,” she said. “But these two fillies are really, really nice fillies and so is the filly who won earlier, which I think is a stakes horse as well. So it’s fun being loaded-up for Kentucky Downs.”

BBN Racing’s Core Values won her third straight race in the Preview Dueling Grounds Derby as she got up on the last stride over favored Royal Prince. It was another neck back to pacesetter Modern Science.

“She likes to make it close every time,” said Oliver. “But she seems to get her head in front at the wire.”

Bejarano had Core Values back in last in the field of seven 3-year-olds, flying through the stretch to get up by a nod at the finish while covering 1 1/8 miles in 1:46.94 over firm turf. The Honor Code  filly paid $24.40 as the longest shot on the board.

“Today, I just wanted to relax in the beginning and make my own ground,” Bejarano said. “By the three-eighths pole, when I had my position, I started to ask her for more and she responded and gave me a good kick. I wanted to make sure we were clear in the stretch. When I came up to the favored horse, I knew we were going to beat him.”

Oliver said she was confident of a big performance.

“I liked that it was a small enough field, there was enough speed for her, and pace for her to close into,” she said. “So I did like our chances. And we had five pounds on the boys. That’s a big deal going a mile and an eighth.”

Core Values was bred in Kentucky by John Bates, Ron Kirk, and Michael Riordan out of the Street Cry mare Sweet Awakening. She is a half sister to two-time Canadian champion Are You Kidding Me. BBN Racing purchased her for $230,000 from Denali Stud’s consignment to the 2019 Keeneland September Yearling Sale.

It’s Oliver Again With Flippant
In the first running of the Preview Dueling Grounds Oaks, Flippant and Bejarano upset the field to give Oliver yet another win on the card.

“I know Flippant was taking a step up off a maiden race, but she was experienced enough to run against this kind of company,” said Oliver, referring to the filly’s five prior starts. “We trained the mare (Frivolous), she was a really classy mare. (Flippant) deserved to be in stakes company, and she proved it.”

After stumbling at the start, Flippant steadied and settled well off the pace, leaving Stillchargingmaria to set a representative pace followed loosely by Takntothecleaners. By the top of the stretch, Caldee and Flippant engaged each other with Flippant gaining the ultimate advantage by a half-length.

“This horse ran a tremendous race today,” said Bejarano. “Today, there was a lot of speed. The track played really fair today for horses that came from behind. We had a beautiful trip after having a bad break from the gate. I just got her set and tried to get her relaxed. She did good and kept running in the end. Definitely, she was the best horse today.”