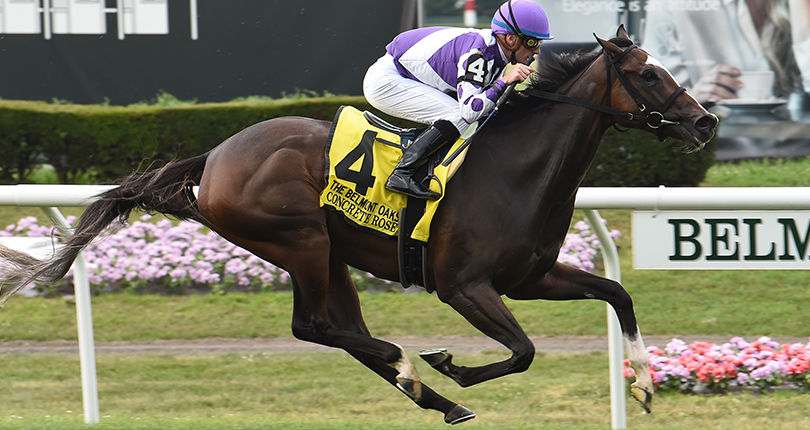 After sitting a perfect trip just off a leisurely pace, Concrete Rose bounded away once given her cue at the top of the stretch, posting a 2 3/4-length win in Saturday’s Grade 1, $750,000 Belmont Oaks Invitational in capturing the first leg of the newly minted Turf Tiara for trainer Rusty Arnold.

Concrete Rose, a daughter of Twirling Candy owned by Ashbrook Farm and BBN Racing, entered the Belmont Oaks off a dominant score in the Grade 3 Edgewood on May 3 at Churchill Downs but had yet to run beyond 1 1/16 miles. She passed that distance test with flying colors on Stars & Stripes Day at Belmont Park, completing the 1 ¼-mile turf event for 3-year-old fillies in 1:59.97 on the firm inner course.

“It’s a long year, but her last two have really moved her forward,” Arnold said. “I was impressed today. I was very, very happy with how she ran.

“[I was concerned] I rested her too much,” he added. “Everyone had run and we hadn’t run in two months and a couple of days and I was a little worried. Her training went smooth, her works went smooth and everything went well. Sometimes your plan works and sometimes it doesn’t work, but this one worked.”

The complexion of the race changed dramatically when 8-5 favorite Newspaperofrecord, who broke on top, was rated back by Irad Ortiz, Jr., which allowed Japanese invader Jodie to strike the front and set tepid fractions of 24.29 seconds for the opening quarter-mile, 49.16 for the half, and 1:14.14 for three-quarters.

The speedy Newspaperofrecord was rank as Ortiz tried to get her to settle, but Julien Leparoux had no such trouble aboard Concrete Rose, who willingly took up position just off the leader in second and coasted along in the early stages.

The field continued to cruise around the far turn, going a mile in 1:37.79, but in a hurried top of the stretch, Concrete Rose quickly overtook front-running Jodie and blitzed her competition with a final quarter-mile completed in just over 22 seconds.

“I thought Chad’s horse [Newspaperofrecord, No. 2] would be on the lead unless they came for her, but I guess today they tried something new and took her back a little bit,” said Leparoux. “The Japanese horse [Jodie, No. 7] wanted to go, so I was happy to be second and my filly relaxed beautiful for me the whole race. I knew at the quarter-pole, I had a lot left. She made a big run at the end. It was nice.”

Despite the soft pace, the Aidan O’Brien-trained Just Wonderful emerged from the back of the pack with a flourish to nip Cambier Parc for second. The Coolmore color-bearer was making her second start in two weeks – with a trans-Atlantic trip in between – after finishing a distant eighth in the Group 1 Coronation at Royal Ascot, a move similar to the one O’Brien employed last year when he sent out Athena on just six days rest to take the Belmont Oaks.

“She likes to drop in at the races at home, so we decided to do the exact same thing here,” said Just Wonderful jockey Wayne Lordan. “I thought she came home really well. It’s her first time going that trip as well, and for the future she’ll get that trip. Hopefully, she can come back out here and compete again. I’m delighted with the run.”

Trainer Chad Brown, who had won three of five editions of the race and had three entered in this year’s running, could do no better than third, with his Cambier Parc taking that position. It was another two lengths back to the Japanese-bred Jodie in fourth.

The next leg of the Turf Tiara, which culminates in the $750,000 Jockey Club Oaks on September 7 at Belmont, will be the $750,000 Saratoga Oaks presented by Encore Boston Harbor on August 2 at Saratoga Race Course. As to Concrete Rose’s participation in the race, there is no doubt in Arnold’s mind that his talented turf filly will be present.

“Absolutely. Unless there’s an issue,” said the trainer. “That’s why we rested her and hopefully it worked.