Concrete Rose 2-For-2 in Turf Tiara After Saratoga Oaks 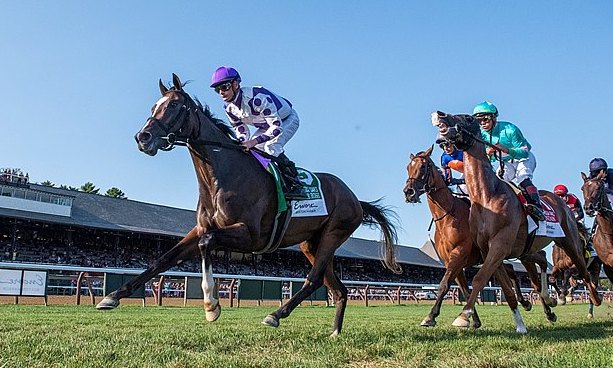 Twirling Candy filly put up slow fractions and pulled away easily in the stretch.

Concrete Rose has barely faltered in her seven-race career.

Only this time, the filly trained by Rusty Arnold for Ashbrook Farm and BBN Racing did it in a walkover.

As five 3-year-old fillies left the gate on the Saratoga Race Course turf, Concrete Rose inherited the lead. She and jockey Julien Leparoux set a dawdling pace, completing the first quarter-mile in :25.58 and the half in :51.41.

At the top of the turn for home in the 1 3/16-mile test, rivals behind her shuffled for position, but Concrete Rose, running freely on the lead with her ears up, cruised along unfazed.

In the stretch, Leparoux simply shook the reins, tapped her once with his whip, and Concrete Rose took off. Before completing the distance in a final time of 1:55.34 over firm turf, the jockey affectionately patted the filly’s neck and let her coast home.

“They gave me the race in the first part of it,” Leparoux said. “We ran very slow, but she finished very strong. She’s a very special filly, and I’m very excited to be riding her.

“I was very confident the whole way around, and I knew she was going to kick home,” Leparoux added. “I’m very happy for the connections. There are a lot of people here that love her.”

Happen got up for second, 4 3/4 lengths behind the winner, and Kelsey’s Crossheld for third. A steward’s inquiry involving fourth-place finisher Coral Beach and fifth-place Olendon did not result in a change in order.

“It was a nice year for me to come up with a nice horse,” Arnold said. “We’re excited. She’s so easy. I’m just on for the ride.

“I was happy when they hung up a half-mile in :51 and three-quarters in (1:15.93). She’s a fast horse, and they turned it into a sprint home. She had done nothing when they hit the half-mile pole, so we were in a good spot.”

Bred in Kentucky by Ron Patterson, Concrete Rose is out of the Powerscourt mare Solerina. The filly has won four graded stakes, and the Belmont Invitational was her first top-level score. Her only loss came in an off-the-board effort in last year’s Breeders’ Cup Juvenile Fillies Turf (G1T).

“We feel good. She handled the month turnaround really well,” Arnold said. “The (grade 1 Queen Elizabeth II Challenge Cup Presented by Lane’s End Oct. 12 at Keeneland) has always intrigued me a lot. That was the plan at the beginning of the year. However, it is going to be tough not to try to win these three races (of the Turf Tiara) the first year they have it. To win all three, that would be awful special, so there will be a lot of talking going on.”