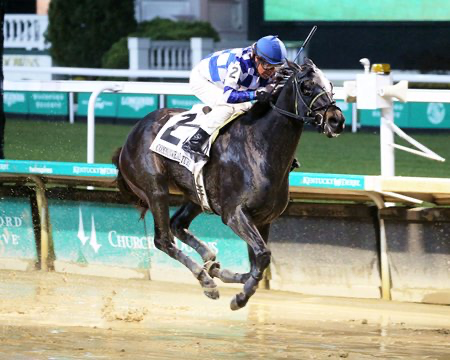 After she scratched out of the Clark Stakes Presented by Norton Healthcare (G1) two days earlier, the racing gods gave trainer Vicky Oliver just what she was looking for when the $300,000 Commonwealth Turf Stakes was pulled off the grass the morning of Nov. 27. Five horses scratched in the Commonwealth, and over a track slick from a half inch of rainfall, BBN Racing’s Trademark  splashed home a four-length winner.

Twice victorious at Churchill Downs last fall as a 2-year-old, Trademark lost his way on the Derby trail this spring and failed to hit the board in seven of his previous eight races. The gelding offered his connections a glimmer of hope in his last start, cruising to a 3 3/4-length win in an Oct. 20 Keeneland allowance optional claiming race.

Ridden back Sunday by Martin Garcia, Trademark broke sharply but drafted behind longshot Fighter in the Win  in second position down the backstretch. After a :23.61 quarter and :47.48 half-mile, Trademark sailed by Fighter in the Win into the far turn and never looked back. Repelling a bid from Stolen Base  down the lane, Trademark hit the wire in 1:46.39 for 1 1/16 miles on a track labeled sloppy (sealed).

Stolen Base ran on for second, with Red Danger  a distant third.

Trademark ($9.12) is a son of Upstart   and out of the Creative Cause  mare Creative Trick. He improved his earnings to $463,689 with his first stakes win.