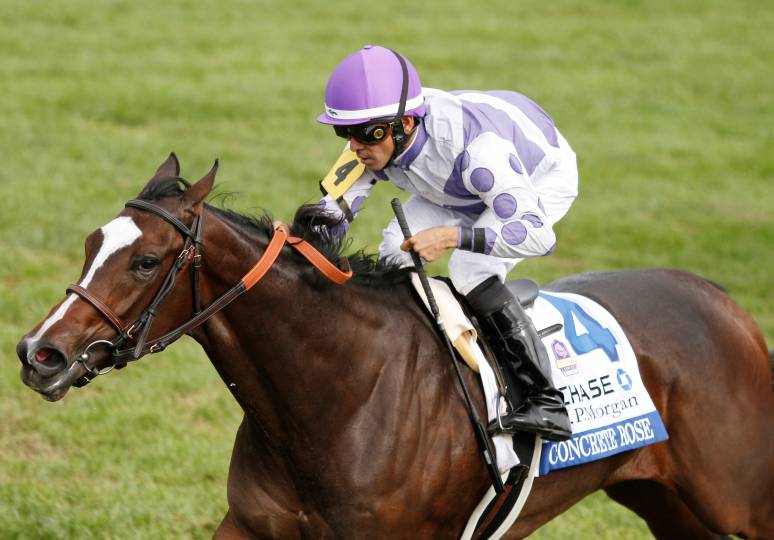 LEXINGTON, Ky. – Concrete Rose ran herself right into the Breeders’ Cup with a dominant performance Wednesday in the 28th running of the Grade 2, $200,000 Jessamine Stakes on the Keeneland turf.

Ridden by Jose Lezcano, Concrete Rose rated just off the pace in the 1 1/16-mile turf race before putting the issue at rest leaving the furlong pole to stay unbeaten in two career starts with her three-length triumph over Pakhet.

Concrete Rose returned $7.20 as second choice in a field of 13 2-year-old fillies after finishing in 1:44.09 over firm going. The daughter of Twirling Candy earned an automatic berth into the Breeders’ Cup Juvenile Fillies Turf by winning the Jessamine, the 85th and last Win and You’re In event toward the Nov. 2-3 championships at Churchill Downs.

“We were worried all last week about whether or not we’d get into this race,” said Rusty Arnold, who trains Concrete Rose for Ashbrook Farm and BBN Racing. “That’s why we entered her in the Bourbon (against males, a race from which she was scratched here Sunday). We were just wanting to make sure we gave her an opportunity to make the Breeders’ Cup. This is a good filly.”

Before 9,331 who turned out on a warm, mostly cloudy afternoon, longshot City Diva led from the early stages until the top of the stretch, where Concrete Rose, always in close proximity to the lead while saving ground, angled out and quickly shot clear.

“She sat very good,” said Lezcano. “In the stretch I came out and she went on.”

Pakhet rallied from midpack to finish a neck before Belle Laura, with Fierce Scarlett, the 2-1 favorite, finishing another three-quarters of a length back in fourth.

Concrete Rose had raced only once before, winning her Aug. 20 debut on the Saratoga turf when rallying from well back at 5 1/2 furlongs.

“We actually thought that was a little short for her,” said Arnold.

Among the early scratches from the Jessamine were Moravia and My Gal Betty, the 4-1 co-second choices on the morning line. Moravia came up with a slight bump on her right front shin, an injury not believed to be serious, according to her connections, while My Gal Betty did not leave her Canadian base, likely owing to the fact she was assigned post 13.

• One race before the Jessamine, Smart Remark ($13) outdueled the comebacking Dak Attack in a $71,000, second-level allowance sprint for 3-year-olds. Lezcano rode the winner for trainer Vicki Oliver.