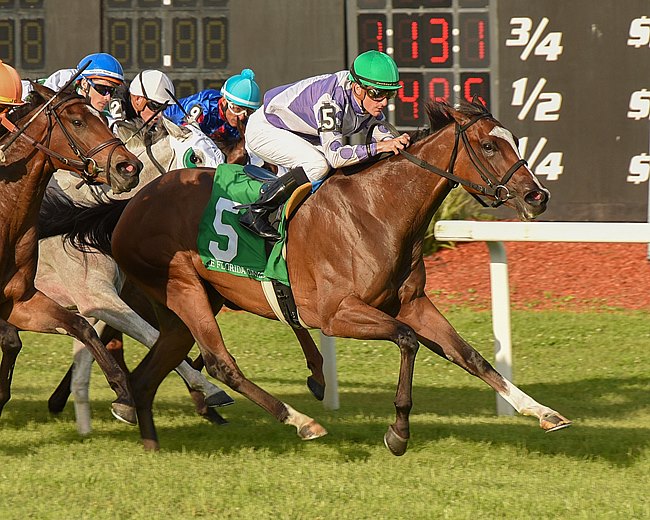 “This was a big one to get out from under her, to come off a layoff and carrying top weight (of 123 pounds),” said trainer Rusty Arnold. “I was worried she was a little bit hyper in the paddock, which she’s never been, but she had never shipped, so I think we can handle that when we get back to Keeneland. This was a quality bunch.”

Sent off at odds of 3-1, the 3-year-old daughter of Twirling Candy  settled three wide in the 1 1/16-mile turf race behind Winter Sunset and leader Mega Fortune. Stalking the pace on the outside under jockey Julien Leparoux, the filly dropped back into fourth as the field hit the half-mile in :48.54.

Still in the lead by one length as the 11-horse field reached the six-furlong point in 1:13.10, Mega Fortune dug in as they entered the far turn and dueled with Winter Sunset for the lead as Concrete Rose rallied to challenge on the outside.

Concrete Rose took command by a half-length after moving three-wide into the stretch, followed closely by Mega Fortune, who began to fade. Powering home, Concrete Rose managed to hold her half-length advantage to the wire as Blowout moved up between horses for second. The final time was 1:43.02 over a turf rated firm.

“She put me in the race nicely and we went pretty quick the first quarter, but we slowed it down very good the second part of the race,” said Leparoux. “She was so relaxed, and she does whatever you want with her, so I sat there and made one run and she had a nice kick at the end. She is a nice filly, and she was still going at the finish.”

Concrete Rose had not raced since her off-the-board finish in the Nov. 2 Breeders’ Cup Juvenile Fillies Turf (G1T) at Churchill Downs. Arnold said he hasn’t decided on the next target for the filly, but added he was pleased the time off seemed to rejuvenate her will to win.

“This is going to probably take something out of her, so we might wait until Churchill Downs (for her next start),” Arnold said. “I’m going to let her tell me. She hadn’t been out in four months, but she is a talented filly and she has acted like a talented filly from day one, so we’re very happy with her.”

Bred in Kentucky by Ron Patterson out of the Powerscourt mare Solerina, Concrete Rose earned graded honors at 2 in the Oct. 10 JPMorgan Chase Jessamine Stakes (G2T) at Keeneland. She was purchased for $61,000 by David Ingordo from the consignment of White Pine Thoroughbreds to the Fasig-Tipton Midlantic 2-Year-Olds in Training Sale, and has three wins from four starts with $266,750 in earnings.