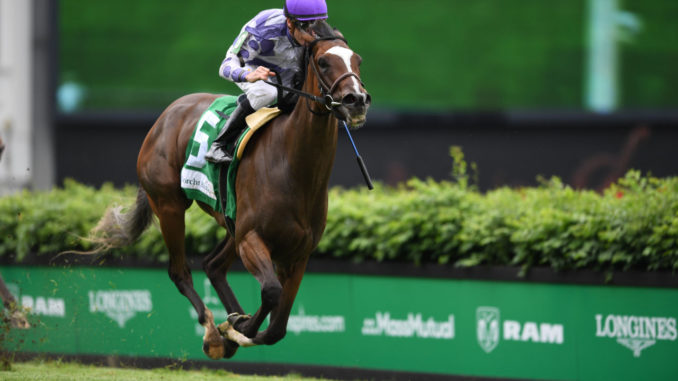 Newspaperofrecord was making her seasonal reappearance here, while Concrete Rose likely benefited from capturing her comeback in the March 9 Florida Oaks (G3). Also contributing to the boilover was Newspaperofrecord’s being on the muscle early, taking a strong hold as she reeled off an opening quarter in :23.53 on a good turf course.

Meanwhile, Concrete Rose was conserving energy several lengths back through fractions of :47.87 and 1:12.68. Rounding the far turn and straightening for home, Newspaperofrecord was still in complete control – until she wasn’t. Concrete Rose quickened smartly, and Newspaperofrecord began to tread water, much like one hitting the fitness wall.

Newspaperofrecord was 2 1/2 lengths clear of Winter Sunset, the daughter of Tapit and Winter Memories, who closed belatedly to snatch third from Cambier Parc. New Roo, Fortunate Girl, and Destiny Over Fate rounded out the order under the wire.

Ashbrook Farm and BBN Racing’s Concrete Rose was earning her third graded stakes victory, having dominated last fall’s “Win and You’re In” Jessamine (G2) en route to the Breeders’ Cup. She suffered her lone loss in the Juvenile Fillies Turf, a subpar effort attributed to her toiling on the worst part of the yielding course. The dark bay has bankrolled $418,650 from her 5-4-0-0 line.

Bred by Ron Patterson in Kentucky, Concrete Rose RNA’d for $19,000 as a Keeneland November weanling, sold for $20,000 as a September yearling, and ultimately brought $61,000 at Fasig-Tipton Midlantic last May. The daughter of Twirling Candy is out of the winning Powerscourt mare Solerina. Her fifth dam, Banja Luka, produced 1986 Kentucky Derby (G1) star Ferdinand, whose 1987 Breeders’ Cup Classic (G1) victory clinched Horse of the Year honors.

Winning rider Julien Leparoux: “The course is good, it’s nice. The rain didn’t make it too soft, and we hadn’t raced on the inside yet, so it was perfect.

“Before the race, she (Newspaperofrecord) was tough to beat, but she hasn’t raced since Breeders’ Cup, so she hasn’t raced in a while. My filly was relaxed the whole time, and she made a big run at the end.

“I rode the race, not paying attention to the one horse, I just wanted to pay attention to my filly. She was traveling good, and was relaxed. I got out at the quarter pole, and started asking her, and I knew she was going to give a big kick. The question was if the 1 was going to come back to me. Today she was great.

Winning trainer Rusty Arnold: “She had one bad race (Breeders’ Cup Juvenile Fillies Turf), there were a lot of reasons for that. We ran her back pretty quick, she’s matured a lot at three and ran a good race. She beat a couple of good horses in there. I would have preferred for it not to have rained. But this turf is really fresh, we’ve only run on it three days. We got in on it in a lot better spot than last fall.”

On beating Newspaperofrecord: “It’s a different year at three. We might have caught her at a vulnerable time. We had the race in Tampa which probably helped us. We had pointed for here, and everything went in the right way.”

On plans: “I’m only looking to get beyond today. I was waiting until we got to here.”

Jockey Irad Ortiz Jr. on Newspaperofrecord, second as the odds-on favorite: “She broke extra sharp today and I took a big hold on her. I was really holding her. Then at the end she tried, but she just got beat today.”

Newspaperofrecord’s trainer, Chad Brown: “She just wasn’t fit enough today. Irad said she was a little keen early on turf – it looks pretty soft – and she set some strong fractions – :47-and-change early. I was a little concerned. She just ran out of gas the last part of it. Hopefully, she gets a lot out of this race. It’s unfortunate she’s no longer undefeated, but we’ll have to go on. We have a really good horse. We’ll have to see what we’ll do with her next.”