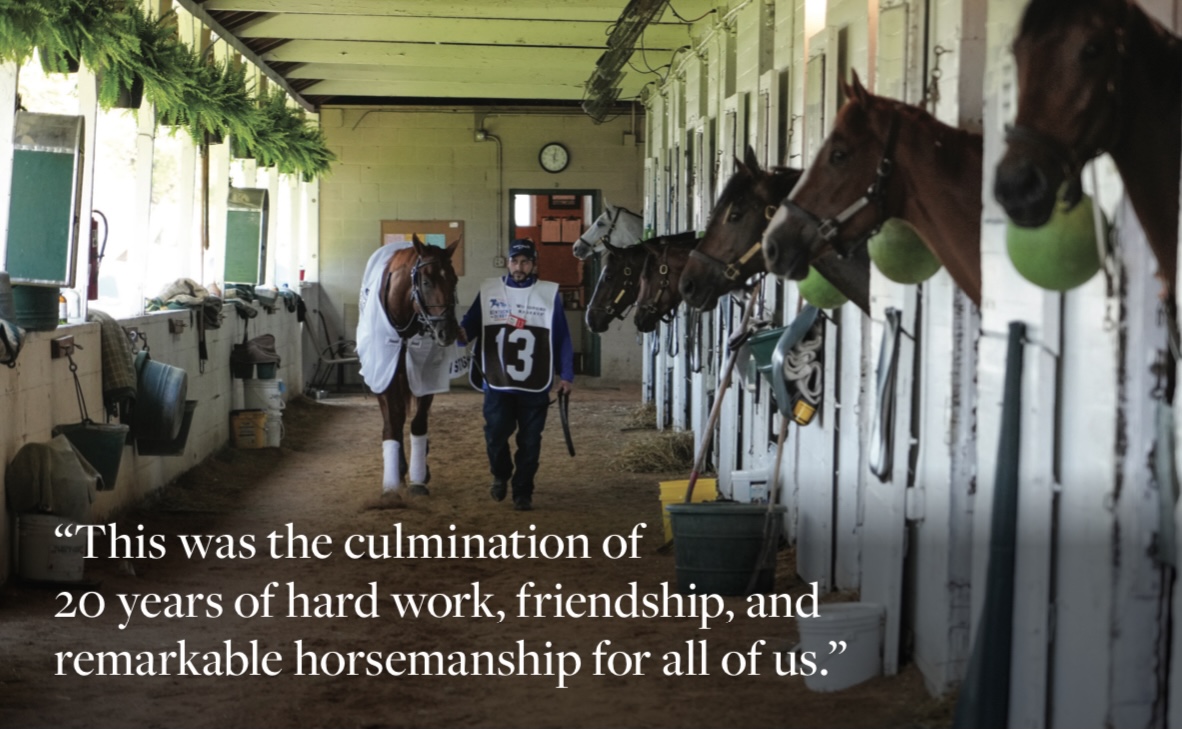 Hidden Stash made a “Run for the Roses” last month, resulting in lasting memories for Brian Klatsky who grew up in Rumson and has lived in Colts Neck for the past fifteen years.

Brian and his business partners, Brendan O’Brien and Kentucky horsewoman, Braxton Lynch, co-founded BBN Racing, and own Hidden Stash and many other racehorses. Although the partners and horse trainer, Vicki Oliver, sensed there was something special about Hidden Stash, they still found themselves in awe of having their horse race as number 13 in the 147th Kentucky Derby on May 1 at Churchill Downs.

Brian’s exuberance for competition has been the driving force behind his varied accomplishments in business, basketball and horse racing. In business, he enjoys success as a partner in Gold Coast Wealth Management in Red Bank, and his financial acumen has played an integral role in BBN’s success. In the basketball realm, a local youth athletic program he began when his sons Alex and Brandon were in grade school now attracts statewide membership and graduated many top players. One of Brian’s greatest joys was watching his son and teammates win the Tournament of Champions (TOC) for Ranney School. His son Brandon is a junior there, and Alex is a freshman basketball player at the University of Florida. In the world of racing, Brian estimates having an interest in 100 horses throughout 20 years in the business, and currently maintains close to 20 horses.

To some, basketball and horse racing may appear to be worlds apart, but Brian explains how, in his world, they have intersected in meaningful ways. 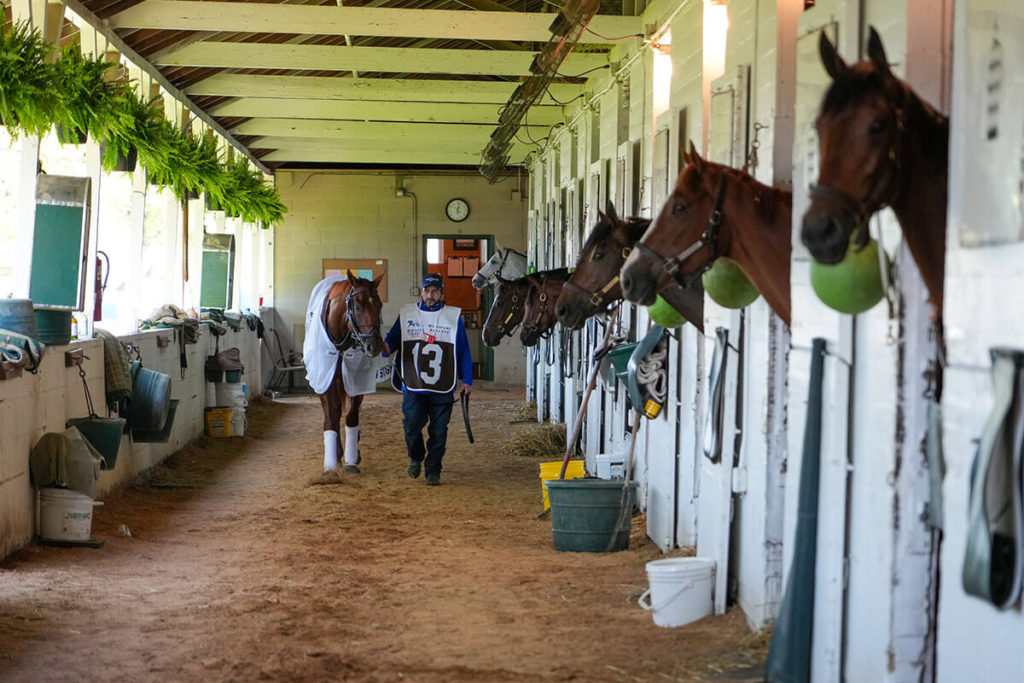 CM: When and how did you first get interested in horse racing?

Brian: On my first day of college at Skidmore in Saratoga, I was with a group of basketball players who went with a jockey’s son to a simulcasting of Belmont Park at the Saratoga Harness track. I grew up five minutes from Monmouth Park and until I learned about racing in my freshman year of college, I didn’t realize I had a gem in my backyard my whole life. I was home from college the summer of 1991 and got all excited for the Haskell. I remember the stories about Hansel, the Preakness and Belmont winner that year, like it was yesterday.

CM: What is your involvement with basketball?

Brian: I played basketball in college. More than ten years ago, I started Team Rio University with my boys, Alex and Brandon, and it has since grown into something much bigger than I ever envisioned when I was in the gym with them as first and third graders. We started at the Central Jersey Hawks with my uncle Fred Klatsky from Holmdel, with a group of Mid-Monmouth travel basketball players. Our success led others from around the state to join us and we grew into a sponsored Under Armour Program. It evolved into a boys and girls program to deliver a complete student-athlete basketball development and educational advancement program. In the last decade, we have graduated more than 100 NCAA Division I scholarship athletes, seven McDonald’s All Americans, and nine NBA players.

CM: You and partner Brendan O’Brien both played basketball in college and many of your racing investors are die-hard fans. What parallels do you see between the two sports that you know so well?

Brian: I think the most interesting parallel is evaluating young prospects.  When I go to the Keeneland or Fasig Tipton yearling sales it feels like an AAU tournament to me. It’s all about scouting prospects and projecting what a young player, or horse, will look like in a few years. I now respect what college coaches go through when evaluating talent. Trying to predict which kids are going to grow, who is going to work hard and not be distracted by girls, which kid is going to be coachable and fit in your system, etc. is always very difficult to quantify based on recruiting rules. When our selection team is at a yearling sale, we are asking the same questions: Which horse is fully grown, who is going to stay sound, who has the pedigree and class to want to compete and run hard? One difference between the two is that horses haven’t learned how to use social media yet! It’s one distraction they don’t have. But horses get distracted by the craziest things as small as a shadow on the ground. 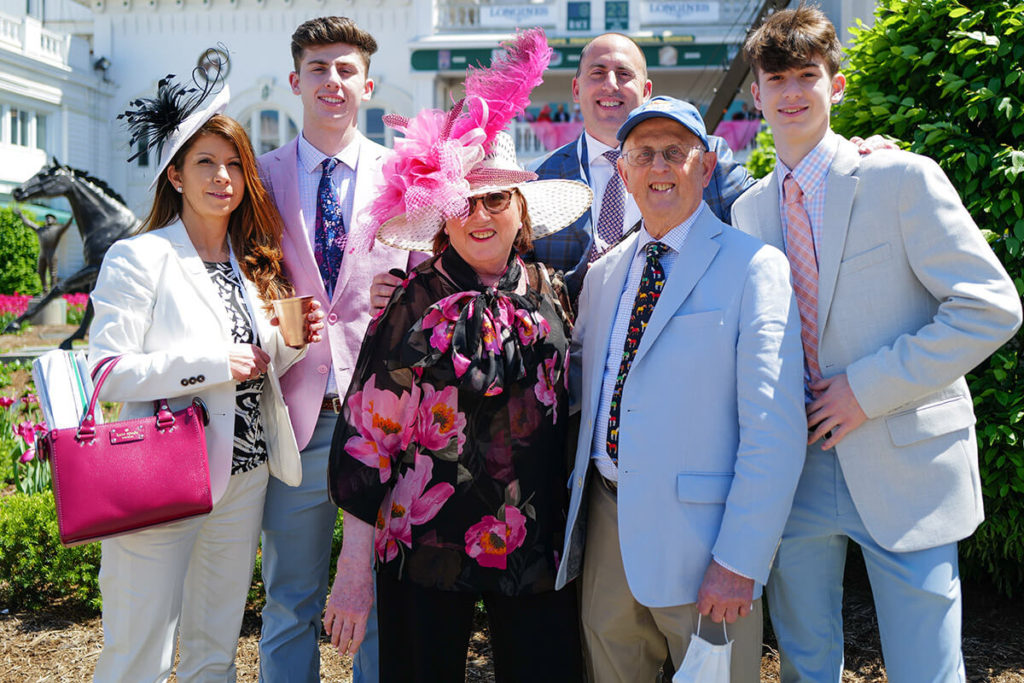 CM: How did your interest in racing develop into a business venture?

Brian: I never thought of racing as a business; it is a hobby that I am passionate about and as with any passion, you want longevity. I can’t compare horses to anything like traditional investments. You cannot forecast earnings on athletes that do not come with guaranteed contracts. Health and luck are so much part of the game. It’s almost impossible to build any predictable financial models around racehorses. The key for me has always been about working with the right people- whether it’s horsemen, or managers for our equity fund. Due diligence, trust, and hard work are paramount for any successful venture. I was very fortunate that in 2000, Jeremy Rosen of Lincroft introduced me to trainers Vicki and Phil Oliver and to G. Watts Humphrey, Jr. who has been a great mentor to me on the business and the industry as a whole.

CM: Speaking of financial models, what kind of matters do you handle at Gold Coast Wealth Management? How has this knowledge contributed to BBN?

Brian: Gold Coast Wealth Management is a private investment advisory firm. We started off as a family office and evolved into an investment boutique for clients seeking a custom and personal advisory relationship. We also run our own equity fund and manage our client’s accounts on the Charles Schwab platform. The business model that Braxton, Brendan, and I devised for BBN is a bit different, allowing partners to quantify their risk and enjoy the sport without any financial stress. The capital structure of BBN Racing allows partners to make a single one-time capital contribution that budgets all the horses’ expenses through their three-year-old career and assumes zero revenue. With this model, partners are never asked again for a capital call. The horses’ earnings and sales proceeds are returned to partners as distributions.  Instead of getting bills, they get checks. If it is economically justifiable to race a horse past its three-year-old career, we hold back some of its earnings to afford continued training. Each year BBN creates a new partnership that buys six to eight horses.  Each partner is invested in that full crop and gets two to three years of action from that single investment.

CM: What is your particular role in this team effort to develop champion horses?

Brian: Our team has worked together for years and has a special chemistry. We have a combined 200 years of experience. My role has been to align and select the right horse people, and to manage the financial discipline of the model. I make sure we budget properly, stay disciplined to our price limits in the auction rings, and provide transparency for all of our partners. 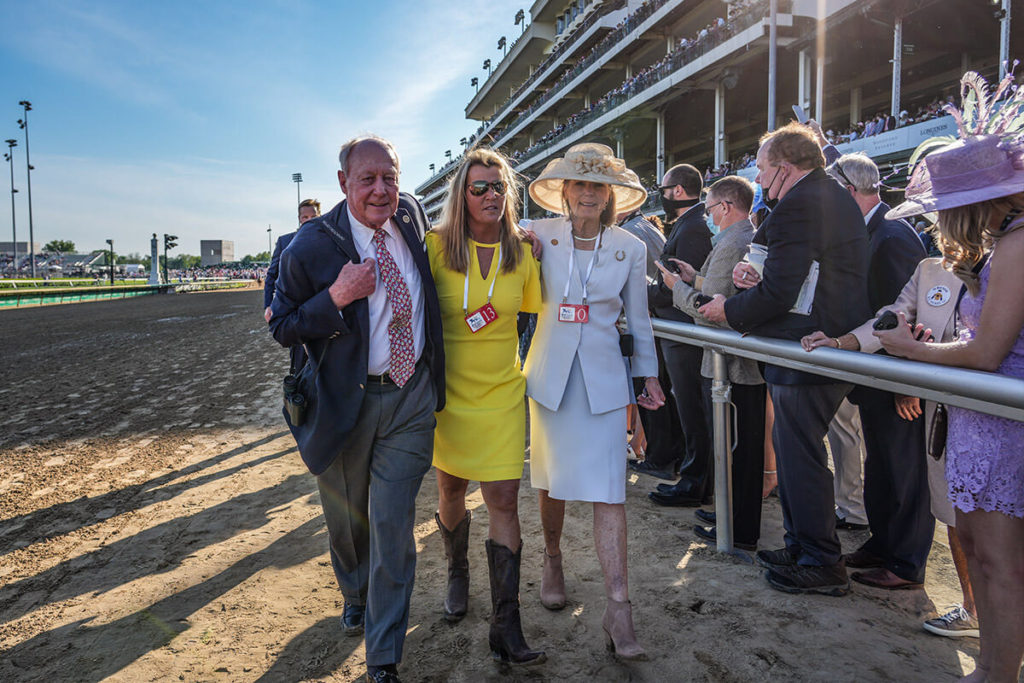 CM: What was it about Hidden Stash that attracted BBN?

Brian: Hidden Stash was our sleeper pick in the BBN II crop of yearlings from the 2019 Keeneland sale. His sire, Constitution, was an exciting young stallion that won the Florida Derby and had his first crop of runners at the track that year. Just a matter of days after the sale, his first big progeny began to rise with Tiz the Law and Independence Hall. We liked Hidden Stash because he had a very athletic look and was underdeveloped at that time. We believed he was still growing, and all felt his upside was significant. We examined him several times and he was a bit stubborn to walk and show off his long stride. If the sale had been a couple of weeks later, there is no way we would have been able to afford him.

CM: To be a part of the Kentucky Derby is a phenomenal accomplishment. What were some of your first impressions when you arrived at Churchill Downs?

Brian: The Derby is the pinnacle of the sport. We never planned or envisioned the reality of being in it. Our goal was always to buy good athletes and develop them. There are lots of great races and you can have lots of success without ever running in the Derby. In life, I have always been about the journey more than just the destination. I had been to the Derby about 15 times and never once realistically thought we would be running in it one day. When we arrived at Churchill Downs for the derby draw, it all hit home. I had tears in my eyes when they called Hidden Stash with the number 13 post. For us this wasn’t just a dream- it was a fantasy come true!

CM: How did the team feel about getting assigned Number 13?

Brian: All we wanted was to be somewhere in the middle.  Number 13 was well received.  The superstitions around 13 made us all even happier with the draw. 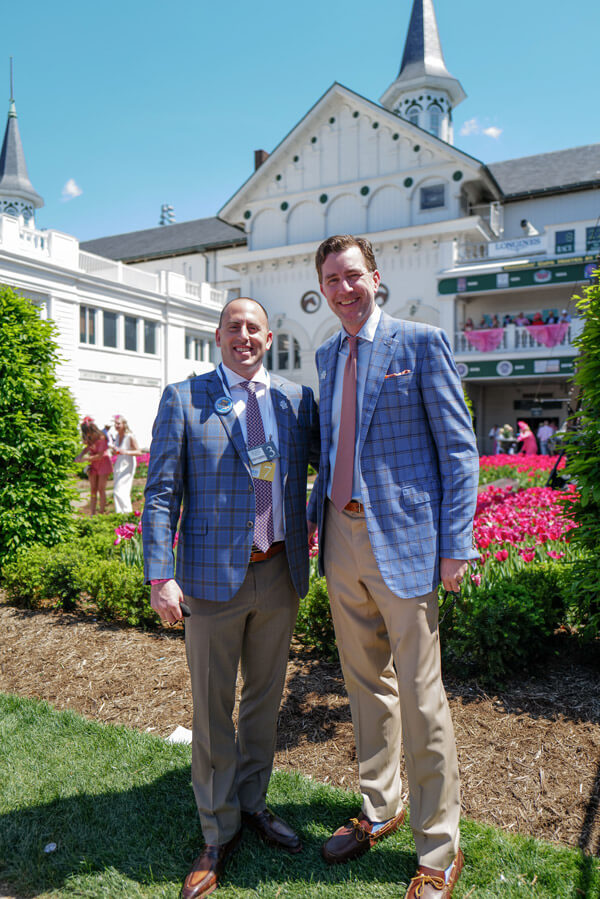 CM: What was the most memorable part of the experience?

Brian: My biggest memory was walking with Hidden Stash from the barn to the paddock before the race. This was the culmination of 20 years of hard work, friendship, and remarkable horsemanship for all of us. I have known Vicki and her husband Phil from their earliest days training at Monmouth Park. Vicki put herself and all of us in contention to make history with a Derby winner, and the first winning horse to be trained by a woman. Watching Vicki enter the paddock locked arm-and-arm with her parents to saddle a Derby horse was one of the most touching moments I ever had in sports.

CM: What were the unexpected aspects, positive and/or negative?

Brian: The negative aspect was the stress in the three weeks leading up to the race. I never expected that hanging over my head 24/7. In racing, so many things can go wrong. I knew we were so close and I feared the phone call every day that something had come up and we would have to pull out. All it takes is a bad step, elevated temperature, cough, or soreness and all bets are off. I struggled to sleep and eat for almost the whole time. On the day of the race, all of that dissipated. We made it! In a 20-horse field anything can happen. I knew we had a good horse and chance. Unfortunately, Hidden Stash has a closer running style. We hoped for a fast early pace, that would allow for him to make a big run late and close in on the early leaders. Things didn’t set up for him to run his race, but he came out in great order and has his best running days still in front of him.

CM: What has been more exciting, going to the Derby, or winning the Basketball TOC at Ranney?

Brian: I struggle with this question. Watching my son grow up with friends from Ranney, and then to win the TOC was remarkable and really special for all of us. The Kentucky Derby was also a very special environment. I can’t answer the question, but I will say that being there for Derby Day made me want to get back and actually win the race someday.