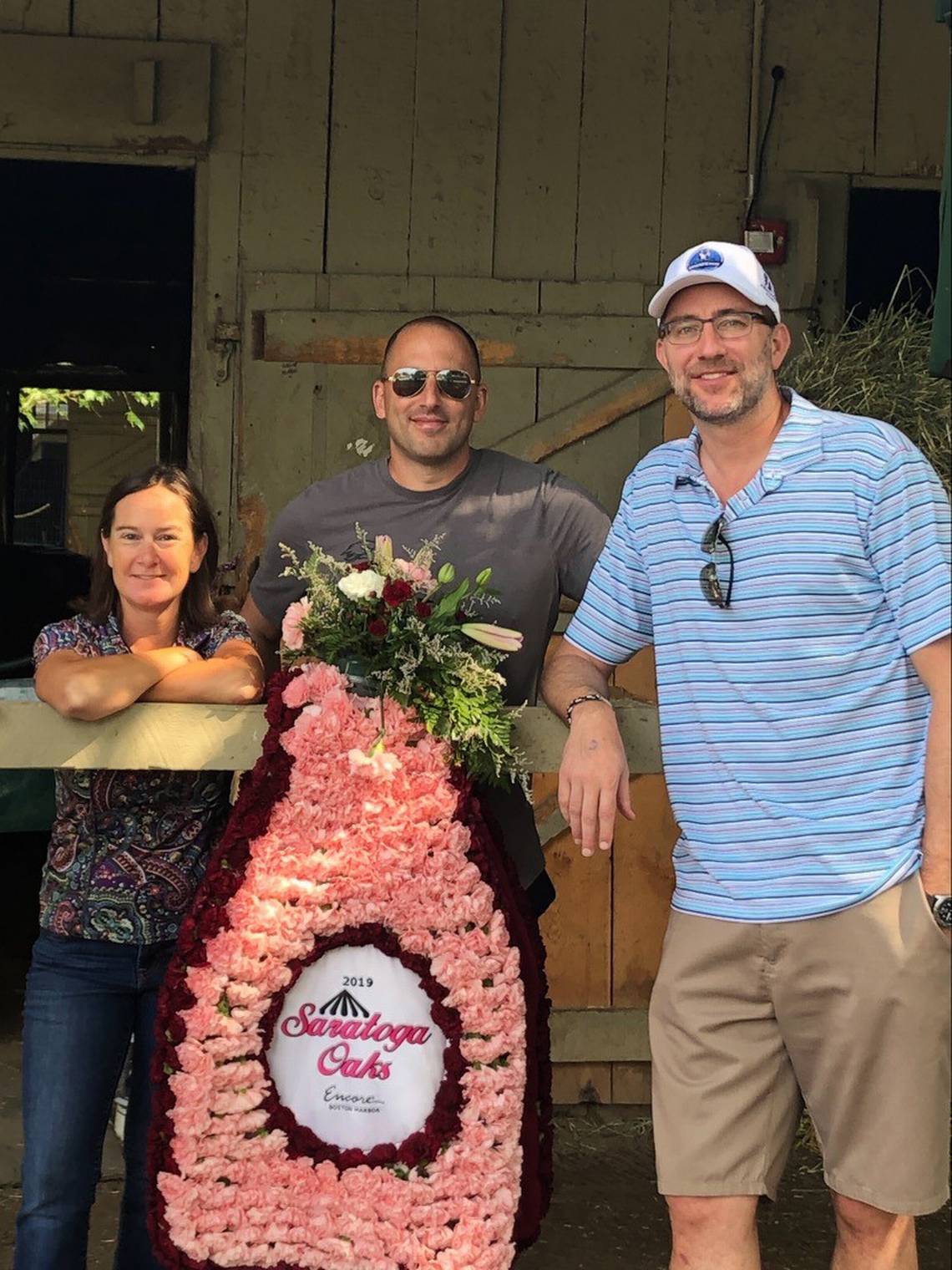 For many Kentuckians, there are few things that stir up the passions more than basketball and horse racing, especially this time of year.

For those local fans with a rooting interest in both sports, Kentucky Derby long shot Hidden Stash is likely to be a favorite Saturday.

The Kentucky-bred colt is one of the earliest products of upstart syndicate BBN Racing, and — while the origins of the outfit’s leadership group are far flung — its principals have deep roots in a love for the sports that matter most in the Bluegrass.

And the nod to Kentucky basketball was by design.

The founding partners in BBN Racing are Brian Klatsky and Brendan O’Brien — partners in a wealth management firm — and Braxton Lynch, the current president of the Kentucky Thoroughbred Association with deep ties to the Kentucky racing industry.

The seeds for the syndicate were planted decades ago at Saratoga Race Course in New York, where O’Brien — a Troy, N.Y., native — went as a kid and where Klatsky was introduced to the sport as a college freshman.

Klatsky — a New Jersey native — had arrived at Skidmore College, and, early in the school year, the son of a jockey took him to the track on a day of simulcasting and taught him about racing.

“I knew nothing about horses prior to that,” he said. “And by the end of my freshman year, I was all in.”

Klatsky grew up 5 miles from Monmouth Park in New Jersey. Before leaving for college, he said he never even had an interest in even pulling into the parking lot. After that first taste of racing at Saratoga, he was hooked.

A few years later, he got involved with the sport himself, ultimately crossing paths with G. Watts Humphrey, a prominent Thoroughbred owner and breeder who has long owned a horse farm in Mercer County.

The pair were involved in business partnerships, and Humphrey became a mentor for Klatsky.

“He’s taught me a lot about the game,” Klatsky said. “And when we decided to get BBN together, a lot of the experience and lessons I learned from him over the years really helped us build the foundation on how to put together a syndicate that could give new people in the business a chance to have a great experience.”

Monmouth Park was also the setting for Klatsky’s introduction to Humphrey’s daughter, Victoria Oliver, and her husband Phil, two trainers who — two decades later — would become integral to the BBN Racing outfit.

Victoria Oliver, who will have her first Kentucky Derby starter Saturday with Hidden Stash, trained horses for Klatsky in New Jersey back in the early 2000s. Eventually, she and her husband moved to Kentucky, while Klatsky backed away from the sport while his kids were growing up.

A few years ago, the Olivers and Humphrey had a racehorse and approached Klatsky about taking an ownership stake. He and O’Brien came aboard.

BBN Racing followed soon after, with Klatsky and O’Brien as founding partners. Lynch joined as the third founding partner and the group’s racing manager. Victoria Oliver and Paris native Rusty Arnold were brought on as trainers, and Bo Bromagen — another Kentuckian — joined as bloodstock consultant.

The syndicate allows for outside individuals to buy into the group’s new crop of yearlings annually. Klatsky said a lot of that interest comes from clients of his wealth management practice, and it’s a way to generate new interest in the sport.

“A lot of our clients were looking to have a little exposure — to having a hobby and having some fun with it. And that’s sort of how we got started,” he said. “A lot of our partners are big sports fans but have not had any experience in racing before. In giving them a taste of it through Keeneland, in Kentucky — the ‘BBN’ was about the best of the best from Lexington. We have partners from New York, Florida, California, Chicago, and at the end of the day we wanted the best people in Kentucky.”

Klatsky and O’Brien both played basketball in college — at Skidmore College and Manhattan College, respectively — and the love for that game runs deep through the BBN Racing outfit.

UK basketball fans might remember Klatsky as the founder of a grassroots basketball program that featured Scottie Lewis, a five-star prospect and major Kentucky recruiting target who ultimately chose the Florida Gators over the Wildcats. Klatsky’s son, Alex, also joined Florida’s team in the same class.

Klatsky earned a master’s degree from Florida after his time at Skidmore, and — with a son on the team — is obviously a big fan of the Gators.

Still, he wanted the racing syndicate to be based around Kentucky. And he said the BBN Racing name and blue and white checkerboard jockey silks were “100 percent” a nod to the greatness of the basketball history in the state.

“We have partners that are Florida fans, North Carolina fans, Duke fans — but it’s cool, because it centers around Big Blue Nation,” he said. “And there’s definitely a ton of BBN roots.”

Victoria Oliver says she and her husband, Phil, a native of England, watch UK games since they’ve moved here, but they’re not among the crazies, though others within BBN Racing are major fans. Both Klatsky and Oliver noted with a chuckle that Rusty Arnold, a UK alumnus, is a diehard fan of the Wildcats.

And Klatsky has found similarities in the worlds of basketball recruiting and horse racing.

Each fall, Klatsky, Lynch, Bromagen, Arnold and the Olivers converge on the sales and try to come together on six to eight yearlings to purchase.

“I like to compare it to a college coaching staff going to an AAU tournament and recruiting players,” Klatsky said. “We’re trying to project what a 1-year-old horse looks like at 3, the same way you’re going to try and project what a ninth- or 10th-grader in high school is going to look like as a sophomore in college. There are a lot of parallels between the two.”

One of the yearlings the BBN Racing crew picked out in its second run together was Hidden Stash, who went for $50,000 at the 2019 September yearling sale at Keeneland.

The son of Constitution was out of the mare Making Mark Money, a daughter of the great sire Smart Strike.

Hidden Stash began his career last year with two 6 ½-furlong races in Kentucky. He finished third and fourth in those, but his connections knew he wanted longer distances. He broke his maiden going 1 1/16 miles at Keeneland in October and won at the same distance at Churchill Downs a month later.

Hidden Stash started the Derby prep season in Tampa Bay, finishing third in the Sam F. Davis Stakes and second in the Tampa Bay Derby. In the latter, he took off during the post parade — Klatsky estimated he ran an extra quarter to three-eights of a mile — and finished second, beaten less than a length.

“We ask ourselves, had he not had the incident before the race, does he win the Tampa Bay Derby? And the answer: we think so,” Klatsky said.

Next up was the Blue Grass Stakes at Keeneland. That race was notably lacking in early speed — Hidden Stash likes to come from off the pace — and heavy favorite Essential Quality chased default pacesetter Highly Motivated around the track before winning by a neck.

Hidden Stash finished fourth, beaten 10 lengths. But, yet again, he was gaining position late and running at the end. The Derby on Saturday will bring an extra quarter of a mile, and the huge field typically leads to a faster pace. Rafael Bejarano will ride him Derby Day.

“I think every time we’ve stretched him out, he’s run better,” Oliver said. “I think everything about him is a mile and a quarter — with pace, which hopefully we get more of in the Derby.”

Oliver has been preparing her first Derby starter at Keeneland, with plans to ship him to Churchill Downs on Tuesday morning after one last gallop in Lexington.

She said she’s been pleased with each of Hidden Stash’s efforts this year. Obviously, a victory in one of those three starts would have been nice, but advancing to Saturday with good health and enough Derby points has been the ultimate goal.

BBN Racing’s brain trust think they have a horse that will love the added distance. History says they should get plenty of pace to run at. Now, it’s all about getting to that starting gate, getting a clean trip in the early going, and then we’ll see what Hidden Stash has in store for the stretch run.

Perhaps, when that time comes, those blue and white silks will be flashing out front.

“You put them on this Derby trail, and it’s tough to cross all the t’s and dot all the i’s to get there,” Oliver said. “Everyone always asks me, ‘Are you excited?’ Well, I am. But I don’t want to get too excited, because anything can happen between now and then. You have to take one day at a time. And you have to keep saying that it’s no different than getting a horse ready for any race,” she pauses, then laughs. “It just so happens to be the Kentucky Derby.”